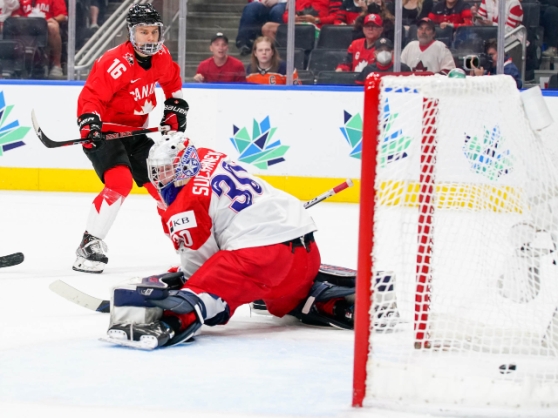 Wearing their snazzy, red, throwback sweaters, Canada blasted past the underdog Czechs by a 5-2 score this afternoon to advance to the gold medal game Saturday night, 6pm local time. They’ll play the winners of tonight’s Sweden–Finland semi-finals. It will be their fifth appearance in the ultimate game in the last six years.

The Czechs will now play the loser of tonight’s game for the bronze medal in the early game tomorrow. They’ll be looking for their first U20 medal in 17 years.

Canada was led by Kent Johnson, formerly of the University of Michigan and soon to be Columbus Blue Jackets, who had a goal and two gems of assists, and Logan Stankoven, who had a goal and assist. He was a pepper pot of problems for Czechia all night long and won an incredible 21 of 23 faceoffs. Olen Zellweger chipped in with three helpers on the night as well.

“It’s really, really cool,” Connor Bedard said of the team’s chances for gold. “It hasn’t really sunk in yet. We’re just so excited to have that opportunity. I thought we were really good from the start. Sure, they’re gonna press a bit sometimes, but I thought overall we took control of the game.”

“It was a tough game,” offered Czechia forward Jakub Kos. “We allowed two goals in the first period, but we didn’t put our heads down. We tried to play hard in the second period and I think did that. We had two stupid penalties and we had two goals scored on us on the power play. So that’s where the game changed. Still, we got within two goals in the third period. Everybody on our team put everything into the game.”

Playing an energetic but patient opening period, Canada scored the only two goals in a period they might have had several more but for the goaltending of Tomáš Suchánek. The hosts opened the scoring at 10:04 thanks to the single-minded determination of Stankoven. He twisted and turned down the right side and made a great pass to Tyson Foerster at the side of the goal. Foerster had the open net, but Suchánek dove to make a ridiculous save, only to see the puck squirt out to Stankoven, who didn’t miss.

Five minutes later, the 17-year-old Bedard added another chapter to the book called “Here’s why he’ll be drafted number one next year.” He took a long pass from Nathan Gaucher and went in from a bit of a bad angle down the left side. But scorers score, and Bedard found a small opening under the glove of Suchánek, and that’s where he wired a shot to make it 2-0 Canada.

Dylan Garand, playing in his fifth straight game, wasn’t particularly busy, but he made a great right-pad save from point blank off the stick of Jakub Kos to do his part.

The game was penalty free until the midway point of the second, after which three minors, two to Czechia, changed the rhythm of the game. Stankoven was back at it with Canada’s first advantage, taking a lovely back pass from Johnson at the Czechia blue line and skating in alone. He made no mistake, firing a shot over Suchánek’s glove.

Moments later, Gaucher hit the post, and then Canada killed off a penalty for too many players. They then went back on the power play, and this time Johnson faked a shot before passing to captain Mason McTavish, who fired a one-timer into the open back side of the goal for a solid 4-0 lead at 16:11. It was his tournament-leading 8th marker and 15th point.

“I just wound up the slap shot and was kind of thinking about it, but I saw McTavish there and obviously was happy he hammered it home. He doesn’t really miss many of those,” Johnson said.

Czechia finally got on the board midway through the third when Jiří Kulich dropped the puck for Jan Myšák, and his quick shot went under the blocker of Garand at 10:54 to make it a 4-1 game with his 5th goal of the tournament.

But the Czechs weren’t done just yet. Less than two minutes later they cut the lead to two on a power play, David Jiříček’s quick point shot finding room under Garand’s glove at 12:44 to make the ending a little more interesting.

Stankoven was having none of a Czechia comeback, however. He roared in on the forecheck to steal the puck, and it landed on the stick of Joshua Roy to the side of the goal. He stuffed it in past Pavel Čajan, who had come in to replace Suchánek to start the third.