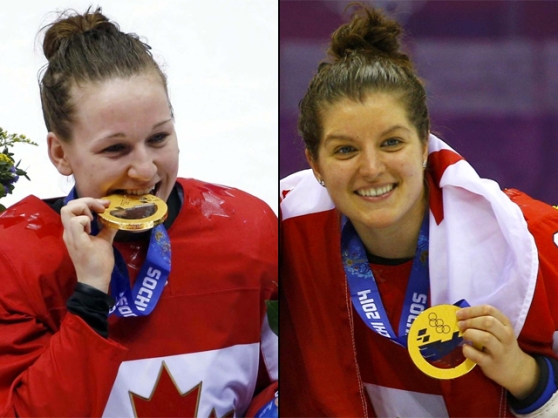 The biggest day of the year in women’s club hockey has come and gone, with the Clarkson and Isobel Cups being awarded and two Canadian defenders joining the unofficial women’s Triple Gold Club.

The first tilt saw the Markham Thunder, a surprise finalist after eliminating the defending champion Canadiennes de Montréal, taking on the Kunlun Red Star, a first-year team made up of American expats and emerging Chinese stars, also a surprise finalist, meet for the CWHL’s Clarkson Cup in Toronto. After goals by Nicole Brown for Markham and Kelli Stack for Kunlun sent the game to overtime, it was Laura Stacey potting the overtime winner 2:49 into overtime, beating Kunlun keeper Noora Räty, who stood on her head for much of the game, stopping 37 of 39 shots, compared to her team’s lowly 18. This marks the first Cup for the Thunder, who moved to Markham after 20 seasons in Brampton.

Our congratulations go out to the players, management and fans of the Markham Thunder, with those on the roster that have also held the IHLC highlighted in bold:

And south of the border in the NWHL, it was a rematch of the 2017 Isobel Cup in Newark, New Jersey, with the Metropolitan Riveters meeting the defending champion Buffalo Beauts. But this year, it was Riveter Alexa Gruschow who got the lone goal of the game just 5:33 into regulation, but a solid Riveter defence and a 21 save shutout performance by Katie Fitzgerald gave the Riveters their first ever Cup on home ice, just a year after leaving New York for New Jersey.

Our congratulations go out as well to the players, management and fans of the Metropolitan Riveters, with those on the roster that have also held the IHLC highlighted in bold: