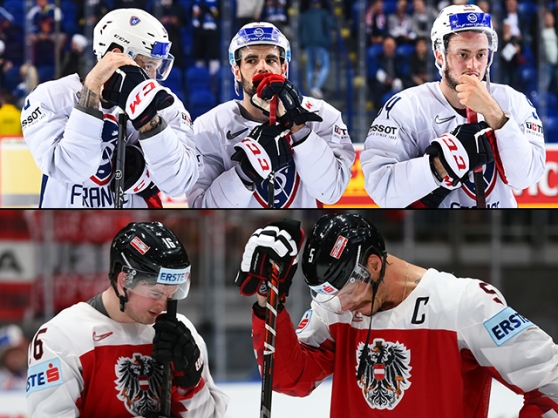 Both relegation games at the 2019 World Championship came down to thrilling and surprising finishes, with Great Britain and Italy, both promoted from Division IA in 2018, upsetting France and Austria respectively to send them down to Division IA in 2020, while each punching their ticket back to the Top Division in Switzerland.

France, who has seen their lineup depleted both due to the retirement of key players, along with a lack of NHL and KHL talent (such as Pierre-Édouard Bellemare, Antoine Roussel and the Da Costa brothers), is demoted down to Division IA for the first time since 2007, losing seven straight and only getting two points by way of forcing Denmark and the Brits to overtime. Great Britain, who returned to the Top Division for the first time since 1994 following a thrilling Division IA win in 2018, overcame a 3-0 deficit midway through the second period against Les Bleus to force overtime, with a Ben Davies overtime winner just 2:03 into the extra frame sending the pro-British Košice crowd into a frenzy, keeping GB in the Top Division in consecutive years for the first time since 1950-51.

Austria, who met Italy in a win or be relegated scenario also on Monday, also needed extra time to decide who would move on to Switzerland in 2020. Despite only scoring one goal in their previous six games, while conceding a stunning 45, the Azzurri fought off a late Austrian comeback and won in a seven-round shootout, with Sean McMonagle notching the winner over Austrian keeper David Kickert. Italy now stays in the Top Division for consecutive years for the first time since a three year stint from 2006-08, while the Eagles are relegated back to Division I for the first time since 2017, continuing the ping-ponging back and forth between Division IA for Austria. The last time Austria stayed in the top division for consecutive years was a long stint between 1998-2005, the final year coincidentally being the last time Austria hosted the Top Division in Vienna and Innsbruck.

In France and Austria’s place next year will be Kazakhstan and Belarus, returning to the Top Division in Switzerland for the first time since 2016 and 2017, respectively; Belarus will be able to stay at the Top for consecutive years by virtue of Minsk hosting in 2021, giving them a stay in the Top until at least 2022. Next year’s Division IA will be made up of France and Austria, newly-promoted Romania, Hungary, Korea and Slovenia, in a host nation to be named at the upcoming IIHF Congress. With the Brits and Italians now locked in for 2020, and a new unique group in Division IA fighting for those two coveted spots, next year’s tournaments should provide some unique surprises!