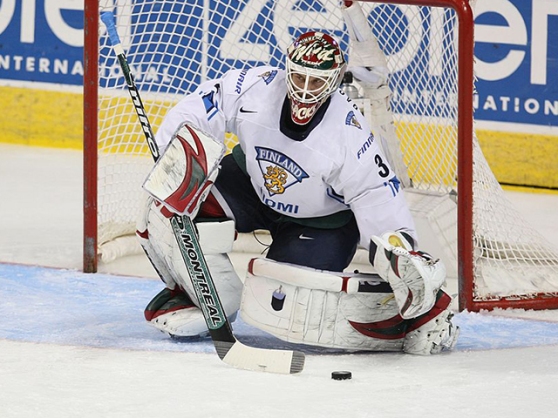 Finnish netminder Niklas Bäckström, a key to the Leijonat goaltending corps since 1998, today announced his retirement from Tappara of the Liiga, joining the NHL’s Columbus Blue Jackets as a European scout.

A Helsinki native, Bäckström joined the pro ranks with his hometown HIFK’s junior team, joining the senior squad for good in 1998, spending parts of three seasons before stints with AIK of the Swedish league, and both SaiPa and Kärpät back in the Liiga. Undrafted in the NHL, Bäckström went to North America as a free agent signing of the Minnesota Wild in 2006, spending all but one of his ten NHL seasons in Minnesota, amassing a .914 save percentage and 196 wins in 413 NHL games between the Wild and Calgary Flames. Bäckström returned to Europe in 2016, spending two seasons with HIFK before closing out his career with Tappara for the 2018-19 season. Bäckström was a two-time Liiga champion (2004, 2005), winning playoff MVP and top goalie honours in those seasons, as well as a one-time NHL All-Star (2009) and William Jennings Trophy Winner.

Bäckström first joined the national team at the 1998 World Junior Championship, getting two starts as backup to Mika Noronen en route to Finland’s second ever World Junior Gold Medal, in front of his hometown Helsinki crowd no less. Bäckström joined the senior team at the 2005 World Championship, joining the team at four Worlds (2005, 2006, 2008, 2016) and two Olympic Games (2006, 2010), collecting a pair of Silver medals from the 2006 Olympics and 2016 Worlds, along with Bronze from both the 2006 and 2008 Worlds and the 2010 Olympics.

Bäckström only won a trio of IHLC titles in his careers, his first being his 1998 World Junior Championship, followed by titles in a pre-Worlds exhibition in 2006 and Finland’s opener of the 2010 Vancouver Olympics. We wish Niklas and his family the very best for his retirement and the things to come!