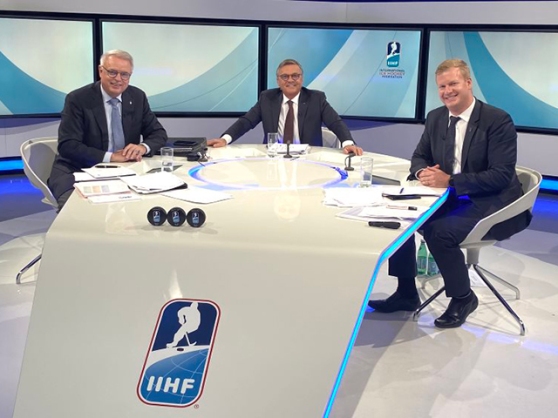 With the scheduled 2020 IIHF Congress that was set for Zürich during the now-cancelled 2020 World Championships, today the International Ice Hockey Federation held their Extraordinary Congress virtually (due to the COVID-19 pandemic), setting the schedule for both the 2020-21 international hockey calendar, as well as for the 2022 Olympic qualification.

The first major announcement was the postponement of the 2021 World Championships in Minsk, Belarus and Rīga, Latvia by a few weeks, with the tournament set to start on 21 May and end on 06 June, the latest the tournament will crown a world champion in history. This was set due to the likely delay of a number of European leagues, as well as the National Hockey League, to start their 2020-21 seasons, thus pushing out the international calendar by a few weeks.

The 2021 Women’s World Championships were locked in for 07-17 April, with the tournament being hosted in Halifax and Truro, Nova Scotia, Canada, which was set to host this year’s tournament until it was cancelled due to the pandemic. The 2021 World Junior Championship dates and locations remain the same, set to begin 26 December in Edmonton and Red Deer, Alberta, Canada.

In other announcements made, the new format for the IIHF Continental Cup was confirmed, and the World Championship circuit has added three new members, with Singapore set to join the Men’s Division IV, while both Estonia and Bosnia & Herzegovina will join the Women’s Division III, while both Philippines and Malaysia were both inducted as full IIHF members. It was also confirmed that the IIHF Council elections will be postponed until 2021, although whether this means that René Fasel’s scheduled retirement will be delayed has not been confirmed.

While it is not actual hockey being played, with the sports world stopped to a halt due to COVID-19, even planning for sports now is a hugely exciting event in itself, so the fact that the plans are now in place for future events means the countdown can begin to a return to international hockey!