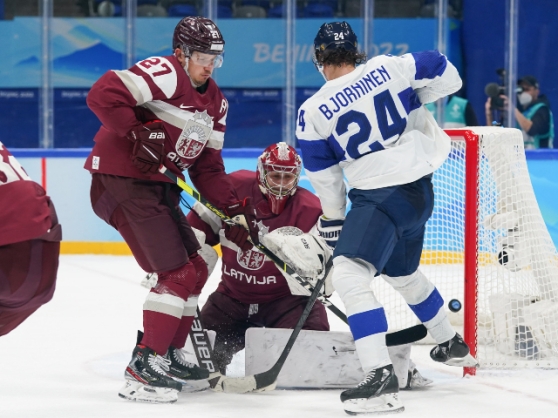 Finland battled past a resolute Latvian rearguard action to maintain its winning start in Beijing. The Leijonat had a hard time solving Jānis Kalniņš in the Latvian net, with the Baltic nation producing a solid defensive display before falling to a 3-1 loss.

It wasn’t always easy watching, but there was no disputing the work rate and commitment on display at the National Indoor Stadium as Latvia sought to rebound from its opening 2-3 loss to Sweden. Finland, though, secured the win on goals from Valtteri Kemiläinen, Leo Komarov and Marko Anttila.

Latvian goalscorer Rodrigo Ābols was not surprised by the cagey encounter. “That’s what we expected from Finland,” he said. “It doesn’t matter that they’re a very skilled team, they were playing pretty compact and waiting for our mistakes, so we wanted to play their game a little bit. That’s why it looked a little compact and low-scoring. Unfortunately, they got the important goal and we didn’t.”

Similarly, Finland’s experienced head coach Jukka Jalonen was unapologetic about the sometimes cautious hockey from his team. “If you want to win these games, you have to play defence first, like we always try,” he said. “Sometimes we score more and sometimes a bit less. Today it was very difficult for us to score.”

There were a couple of changes for Team Latvia. Kalniņš, who played three seasons with Jokerit Helsinki in the KHL, got the start in goal; his insider knowledge of the Finnish game may have given him the nod over Ivars Punnenovs, who started against Sweden. Miks Indrašis, a surprise absentee against Sweden, returned to the offence in place of Andris Dzerins and Artūrs Kulda slotted into the defensive line.

Finland, too, switched things up from the 6-2 win over Slovakia. The experienced Anttila returned to the team after his spell in isolation, while Toni Rajala was preferred to Niko Ojamäki on the third line. Defenceman Niklas Friman was the other player to make way on Friday.

Latvia suffered an early blow when captain Lauris Dārziņš collided with Teemu Hartikainen. Dārziņš fell awkwardly against the edge of the door to the Finnish bench and headed to the locker room for treatment. He did not return to the game.

Despite that loss, the Latvians had plenty to be happy with in the first period. There were few Finnish chances in the opening stanza as Harijs Vitolins’ team defended stoutly. The best opportunity for the Leijonat fell to Iiro Pakarinen, but he had little space to work with in front of Kalniņš and fired directly at the goaltender. At the other end, Latvia had a couple of half chances of their own, with Kaspars Daugaviņš and Mārtiņš Dzierkals both sparking anxiety as they looked to stuff the puck home at the back door.

The pattern of play did not much change in the second period. Latvia continued to make things difficult for Finland, while Jalonen’s well-drilled team struggled to find the creative edge needed to break down a resolute opponent.

“Latvia played very well,” Jalonen added. “They battled hard, have a good goalie and it was quite difficult to get in front of their net, but finally we got two goals from those situations. It’s never easy to play against a team that defends like that.”

It wasn’t until late in the frame that chances started to arrive in front of Kalniņš. The Vityaz Podolsk partnership of Valtteri Kemiläinen and Miro Aaltonen almost unlocked the door, but Aaltonen’s effort at the back post produced a fine sliding save from Kalniņš. Then Aaltonen was the sidekick in an odd-man rush which saw Joonas Nättinen flash an effort across the face of the net before Hartikainen’s dangerous feed across the paint evaded Rajala and went to safety.

In Ufa, where he plays his hockey for Salavat Yulaev, Teemu is known as Harti-gol; today, though, it was Harti-post when he beat Kalniņš only to see his effort fly back off the piping. The Latvian netminder looked far better than his unprepossessing stats for Vaxjo Lakers this season, but he was unable to keep the scoreboard blank into the second intermission. With two minutes to play in the middle frame, Kemiläinen fired in a shot from the blue line and a crowd of players obscured the goalie’s view as the puck found the net.

Latvia, though, has good form on the power play in this tournament. Against Sweden it converted two out of three, almost clawing back a three-goal deficit in the process. Today, the special teams did the trick again when Renārs Krastenbergs’ dish set up Ābols for a wicked one-timer that flashed below Harri Säteri’s glove to tie the scores. Ābols, whose father Artis is on the Latvian coaching staff, had three goals in qualifying last year; today’s tying effort revived hopes of a first victory over Finland since the 2014 World Championship.

“We just had a good regroup, I think,” said Ābols of his tally. “They tossed the puck out and we came in with speed, which we were lacking before on the power play. Krastenbergs made a great pass to me and I was open in the slot and I just had to pick my corner, which I did.”

However, the Leijonat regained the lead with five minutes to play. Once again, it took a point shot to unpick the Latvian defence, with Juuso Hietanen letting fly from the right-hand corner and seeing his effort tipped past Kalniņš by Leo Komarov. The Estonian-born centre secured his place on the roster when he left New York for Saint Petersburg earlier in the season and avoided the NHL embargo in Beijing.

Any hope of Latvia stealing a tie late in the game was extinguished by Anttila when he fired home from the right-hand circle. The Latvian bench challenged the call, hoping for goalie interference by Hannes Björninen as the shot came in, but there was no reprieve and Finland coasted through the final moments on the power play to seal the win.

And Jalonen paid tribute to the returning Anttila. “He’s a good player, a good person and an important player for us,” concluded the head coach.