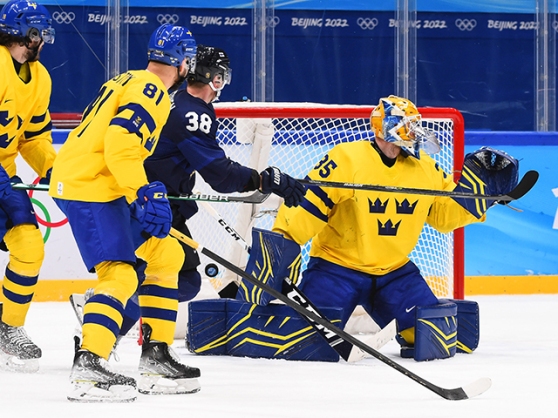 Harri Pesonen scored in overtime, pouncing on a turnover and firing a shot from the slot just inside the far post, to cap an incredible comeback for Finland, who were down 3-0 after two periods but eventually won 4-3.

“The puck was behind the net and, at first, I thought they got the puck,” Pesonen described. “But somehow it squeaked in the middle and I just turned and tried to get it high and, luckily, it went in. It was a nice way to end it.”

With the win, Finland wins Group C with eight points, and will be seeded either first or second heading into the knockout stage – depending on the result of tonight’s USA–Germany game. Sweden finishes second in the group with seven points and will be seeded fourth, meaning both of these teams will proceed directly to the quarter-finals.

About the only thing predictable about this game was the ill feelings between the teams, and it got downright nasty at times. While his teams are normally very structured and disciplined, Jukka Jalonen’s squad was anything but at times during this one, especially during the second period, when the Swedes scored the game’s first three goals – all on the power play – before the Finns came back with three goals and two power-play markers of their own in the third.

Sweden outshot Finland 17-3 in the second period and Finland outshot Sweden 14-3 in the third. Altogether it finished pretty even, with Sweden having a 30-27 edge in shots.

“I thought it was a weird game. I don’t think I remember a game like this,” said Swedish captain Anton Lander. “The first period was normal hockey, the second period was power plays only for Sweden and in the third period, we knew we were going to get some calls on us.

“It was a weird game and we’re not too happy. We stopped playing, just sat back and let them come back and tie the game. Finland is a good team with good players. We talked about it before but maybe we have to talk about it a little louder.”

After two starts from Harri Säteri, the start to this game went to Jussi Olkinuora, their man in net during last spring’s Silver medal team in Rīga. Okinuora showed he was on his game in the early minutes in which Sweden carried the play, particularly during a flurry in the seventh minute when the goalie dropped his stick and sprawled in his crease Hašek-style to make a couple of saves off Marcus Krüger and Max Friberg with his arm.

At the other end, Magnus Hellberg’s biggest action of the period came when he got bowled over by Miro Altonen, who was shoved into the crease by Swedish defenceman Oscar Fantenburg. Aaltonen was given a minor penalty for goaltender interference.

The Swedes finally opened the scoring at 24:24 on a one-timer from Lucas Wallmark, taking a perfect pass from Tömmernes and using a Finnish defender as a screen for his fourth goal of the tournament.

Just 30 seconds later, Markus Granlund caught Philip Holm with a shoulder to the head, knocking the Swede to the ice and sparking another scuffle. Holm was helped to the dressing room and didn’t return. After a review, Granlund was given a match penalty, sending the Salavat Yulaev Ufa forward to the showers and giving the Swedes a five-minute power play.

On the power play, Sweden cashed in on another one-timer set up by Tömmernes, this one from the opposite side by Lukas Bengtsson that beat a screened Olkinuora five-hole.

After that penalty expired, Sweden went right back to the power play when Petteri Lindbohm took an undisciplined slashing penalty after the whistle and the Swedes took advantage again, with Anton Lander scoring on the rebound after the original point shot by Jonathan Pudas.

“I think most of the game we played really well,” said Friberg. “The first two periods were our best of the tournament so far, I think. Obviously, a couple of penalties – not great ones – and a little bit of hesitation from our side invited them back into the game and they did a good job on the power play.”

“The first two periods, we didn’t play our normal game,” said Finnish coach Jukka Jolanen. “We were frustrated, took stupid penalties, but in the third we went back to our normal system, focused on the right things and, fortunately, we got those goals one at a time and were able to win the game.”

The Finns finally got on the board with 14:26 on their second power play. Hartikainen fired a one-timer from the slot over Hellberg’s glove after a perfect set-up by Sakari Manninen.

Finland went back to the power play when Linus Johansson was called for hooking with 5:27 to play. The Finns immediately attacked furiously for another goal and thought they’d got one when Valtteri Filppula tried to put in a rebound but it hit Hellberg in the shoulder and video replay was needed to see if it had crossed the goal line. It hadn’t, but Pakarinen did score just seconds later, putting in a rebound after Hartikainen’s point shot with 4:30 to go.

“On the national team, that’s usually my role,” said “I play the power play in front of the net and I try to score from there. I was just trying to go to the net and get pucks in and this time, a couple of them went in and, of course I was happy to score.”

And they kept coming. Hartikainen and Miko Lehtonen got the puck to the front of the net, Hellberg kept it out, but with Pudas trying to clear the loose puck away from the crease, it was Pakarinen again, using his stick like a snow shovel to push the loose puck under the pad of the sprawled Swedish goalie.

Incredibly, the game was off to overtime, where Finland completed the comeback.

“It’s a memorable goal,” said Pesonen said of his unassisted game-winner at 62:01. “I haven’t scored that many 3-on-3 overtime goals so for sure, I’m going to remember this, but hopefully the best goals are still to come.”

Said Lander: “We’re not happy with this result, but still, we’re going to the quarter-finals, but that’s going to be important if we want to go farther.”