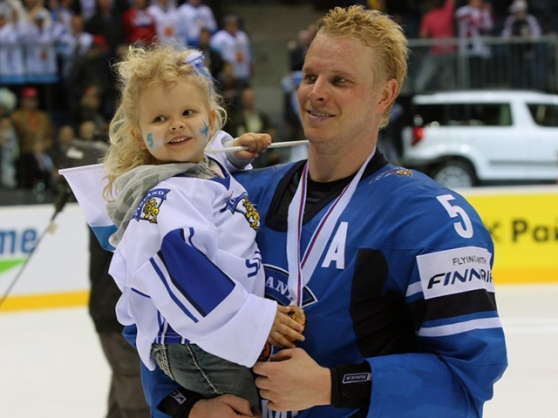 Finnish defender Lasse Kukkonen, a mainstay of the Leijonat since 1999 that helped Finland to just its second World Championship in history in 2011, today announced his retirement from his hometown club, Oulu Kärpät, at age 38.

Starting his career with Kärpät’s junior system in 1996, Kukkonen joined the senior team in 2000, spending three seasons in the Liiga before jumping to the NHL to join the Chicago Blackhawks in 2003. After returning to Oulu during the 2004-05 NHL strike, Kukkonen would only spend part of one more season in Chicago before being traded to Philadelphia, where he would spend two and a half seasons before leaving for Omsk of the KHL in 2009. Kukkonen would spend three seasons in Russia between Avangard and Metallurg Magnitogorsk before joining Rögle of the Swedish League in 2012, spending just one season before coming home to Kärpät in 2013. Kukkonen would spend his final seven seasons as team captain, helping Oulu to four Kanada-malja titles (2005, 2014, 2015, 2018), as well as two more finals in 2003 and 2019. Kukkonen was also a four-time Liiga All-Star (along with one KHL All-Star nod), two-time League MVP, two-time Top Defender in the league and 2016 Champions Hockey League silver medallist.

Over the course of his long tenure with the Leijonat, Kukkoken held the IHLC a remarkable fifteen times in his career, starting with his first title at the 2001 World Juniors, with titles en route to his 2011 Worlds Gold and 2016 Worlds Silvers, and ending with Finland’s tenure at the 2018 PyeongChang Games, where the Finns started the tournament with the IHLC. We wish Lasse and his family the very best for his retirement and the things to come!