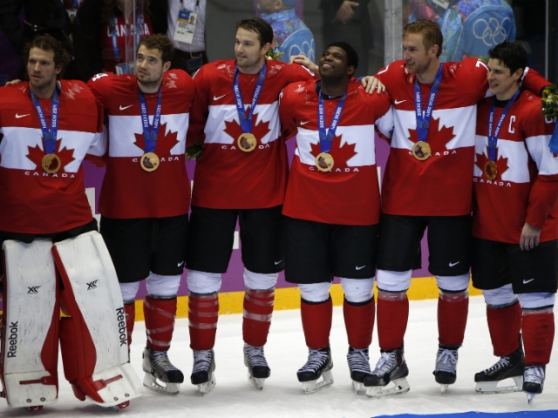 2014 was quite a year for the International Hockey Lineal Championship, in that theihlc.com formally launched in September, bringing 100+ years of international hockey history online. But this calendar year certainly saw its share of movement and excitement as well.

On the men’s side, the IHLC started 2014 in the hands of Finland, who snuck out of the 2013 Channel One Cup with the title after a win over Russia. Finland opened their Olympic group play in Sochi with dominating wins over Austria and Norway, before losing the title to Canada in their group round finals. Canada eked out close wins over Latvia and the United States to make their second straight Gold Medal Game, shutting down a potent Swedish offence to win the Gold in a 3-0 victory, uniting their Gold with the IHLC.

Entering the World Championships in May with title in hand, Canada was stunned in their opening game, a shootout loss to France, that cost them the IHLC. But perhaps even more shocking was France’s first defence, which resulted in a loss to Italy, who won their first ever IHLC and became the 23rd nation to win the prestigious title. However, their reign was short-lived as well, losing to Denmark in their next game. Canada won the IHLC back from Denmark on 15 May, and would dispatch Italy, Sweden and Norway to complete their group round. However, Canada was knocked out of the Quarterfinals once again, this time by Finland, who recaptured the IHLC. The Leijonat dumped Czechia en route to the Gold Medal Game, ultimately dropping the IHLC in a losing effort to Russia on 25 May.

Russia’s win guaranteed the IHLC would enter the 2014-15 Euro Hockey Tour, which began with a Russian loss to Sweden in the Karjala Tournament opener on 06 November. Sweden would win their next two over the Czech Republic and Finland to sweep the Karjala Tournament, also defeating the Czechs in their opening Channel One Cup game on 18 December. However, Russia would upend Sweden for the title, defeating the Czechs on 21 December to finish a perfect 3-0 in Sochi, thus ending 2014 with the International Hockey Lineal Championship in hand.

Russia will now begin 2015 with the title in-hand, opening their year with a two-game series against Czechia on 05 February as part of the revamped Euro Hockey Tour. The Russians will look to not only keep the title into the World Championships in May, but to continue to pull away further from Canada in the IHLC Rankings, setting themselves up as the dominant all-time wins leader.